There’s a Full Moon next Saturday, the 22nd December, exacting at around 5:48pm in the UK.

Again, just like last month, the Full Moon will be at that all-important critical degree (00°), but this time it will be in the cardinal sign, Cancer. As in their cardinal modalities, the four cardinal signs, Aries, Cancer, Libra and Capricorn, are all about leadership, movement and initiating, just as they each represent the start of a new season (Spring, Summer, Autumn and Winter, respectively). As the critical 00° degree of any sign is also about beginnings, initiation and fresh starts, here is what an Astrologer might call a double whammy in indication of such things, or a double strength in likelihood of them being what this period of time could be about for many of us, most especially for those of us whose personal planets closely aspect the Sun or the Moon on the 22nd December this year.

Because the New Moon in Sagittarius on the 7th December this month squared a Mars-Neptune conjunction in Pisces, while Venus in Scorpio opposed Uranus in Aries, simultaneous to the grand water trine between Mercury, Chiron and the North Node, there may have been some emotional blockages that needed to be released over the past couple of weeks, or increased personal flare-ups and tensions relating to our deep wounds or inner psyches. This Full Moon in Cancer, however, may prove to be a promising time for opportunities to rest and heal some of these wounds, while embarking on some positive, new approaches towards them, with Venus moving on to trine Neptune (bringing faith and idealism), the Sun-Moon opposition making easy aspects with Uranus (inventive creativity connecting the emotional self and the ego or the subconscious and the conscious) and Mars moving on to conjoin Chiron in Neptune (driving us towards deeper healing and forgiveness).

While it’s true that we usually say New Moons are the best time for making fresh starts, it just so happens that this Full Moon in December is also a great time for fresh starts, especially those relating to the points I have outlined in this article, on top of being a great time to bring to culmination all you have been intending or working on since the New Moon on the 7th December. I’m sure this is great news for anyone practising manifestation work and especially for those working on healing, including crystal healing. Please pencil in this time if you are working as a healer also, as Chiron, also known as the ‘wounded healer’ in Astrology, will be in a prominent position in the 10th house of career near the Midheaven in many parts of the world, whilst conjoining Mars in Pisces at the time of the coming Full Moon at 00° Cancer.

If you would like to subscribe to receive ‘The Post’ via email every month, just in time for the Full Moon, you can do so here. 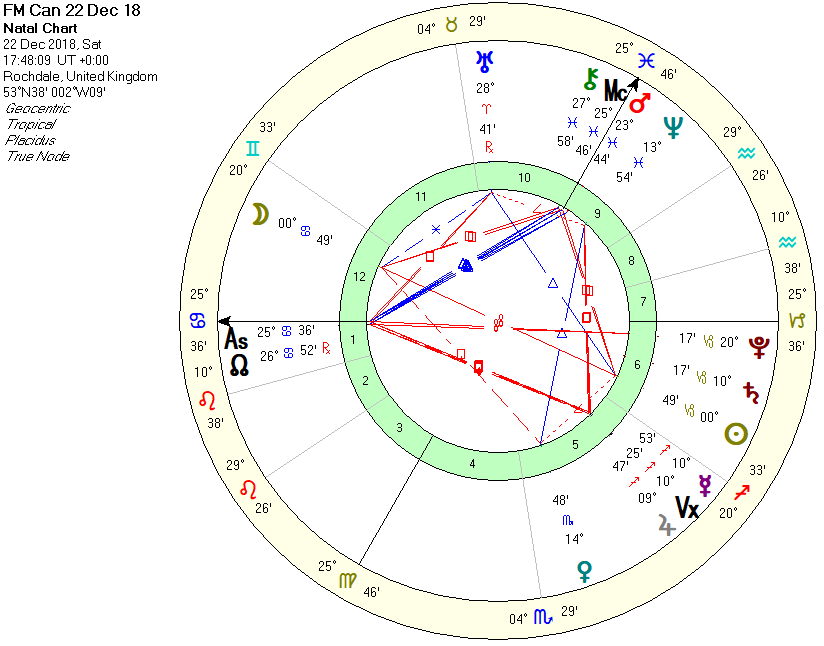