Your forecast for this Full Moon period and the fortnight ahead.

Simply because the Full Moon tomorrow follows on from two eclipses, the Super Blood Blue Moon Total Eclipse on the 31st January and the Partial Solar Eclipse on the 15th February, I have been quietly expectant of a lot happening this week for everybody due to the carrying over of such potent energies from the previous lunation cycle.

There may be unexpected occurrences and set-backs that make the week seem to carry something of a similar air of a mercury retrograde, given that Mercury is afflicted during this Full Moon in three different ways. Firstly, Mercury is in detriment in Pisces, which is one of the most uncomfortable signs of all for Mercury to be in. Secondly, he is conjoining Neptune. Although it’s a fairly wide conjunction, the energies of Neptune will be picked up well by Mercury, given the four planet stellium in Pisces this week (Neptune is known as a malefic planet and a conjunction or other hard aspect to a malefic planet is always regarded as an affliction). Finally, Mercury is squaring Mars, which is a hard aspect to another malefic. All of this means that the energies of Mercury will not be channelled as well as it could be through the other planets hence may not be functioning as strongly or directly as if he was not afflicted and this is why the things that he represents may be delayed or unexpectedly interrupted. These are things such as anything involving administrative tasks, appointments, education, roadways, short distance travel and communications and messaging.

One might suppose that Mercury’s affliction in Pisces and his conjunction with Neptune could potentially manifest as an increase in general confusion with feelings of loss and lack of direction, although, while this may be the outcome this week for some, this isn’t necessarily the case with the Full Moon’s trine to strong Saturn in domicile in Capricorn and Mercury’s smooth sextile aspect to Pluto, also in Capricorn. These, coupled with the Full Moon’s appearance in Virgo, another earth sign that is ruled by Mercury, may definitely be enough to take the edge away from any potential confusion and lack of direction that Neptune may threaten to bring and instead, they may just be able to sway manifestations of the affliction of Mercury into the direction of more tangible and concrete occurrences than general thought and state of mind. However, due to Mercury’s square to Mars in Sagittarius, there could be some increase the likelihood of general dangers and arguments or disputes amongst loved ones.

The Full Moon actually occurs tonight (on the 1st March) at 07:50pm in Eastern parts of the USA and at 00:50am in the UK and Ireland tomorrow, the 2nd March. This means that the Ascendants for the Mundane charts of the Full Moons for the two regions fall at different degrees and in different Astrological signs altogether. For example, the chart for the Full Moon in London has an Ascendant that lands at 27° Scorpio, a sign which is co-ruled by both Mars and Pluto. This may increase the influential strength of both of these planets regarding Mundane (political or social) manifestations in the UK. This, to me, is very interesting because the stellium in Pisces, which opposes the Full Moon, lands on and around the IC (the Imum Coeli) of the Full Moon, with afflicted Mercury very closely conjoining the IC. The IC is known to represent weather conditions, so it makes sense that, throughout the UK, we have experienced set-backs due to adverse weather conditions and these set-backs happen to be very much aligned with manifestations of the planet Mercury afflicted, such as the closure of schools and the dangers of using the roads. Mercury also signifies young people and teachers. With regards to where the Full Moon and her opposing Sun lands in the chart of the UK, it is across the 5th house/ 11th house axis, which also signifies children and the community, following on the theme of what has happened this week in the UK. The adverse weather has been a huge amount of snow fall, which is quite unusual at this time of year. One thing I also want to add, is that the planet Neptune has been known throughout history to signify adverse weather conditions and set-backs on a large scale, especially ones that are relating to water, hence snow and ice also.

The chart for the Full Moon in Eastern USA has an Ascendant that lands in the early degrees of Libra, which is an air sign ruled by Venus. Because Venus is not a malefic and is known for being such a peaceable, pleasant planet, this reason alone indicates that there may not be adverse conditions this week to the same scale in Eastern America as there is in the UK and this also means that the same level of setback is also unlikely, especially regarding the weather. However, Mercury is traversing home land through the 6th house while squaring Mars in the 3rd, also a natural house of Mercury, so setbacks in the way of communications, roads, signals and transport could still have become a theme this week in the region, especially set-backs between workers, unions, prisons, hospitals (or other institutions) and the defence for the USA (the police force and the army etc). Saturn on the IC could also manifest as setbacks within the property or mining sectors, but Jupiter in the second house, Venus as the Ascendant ruler in a good position in the Descendant and Mercury playing a slightly stronger role in the USA’s Full Moon chart, makes the Full Moon in this region appear a much smoother sailing one and overall, perhaps even with positive outcomes.
There are even further indications of manifestations very focused around transport, roads and communications (including airborne signals, WIFI and radio etc), when I look at the Full Moon over the USA’s Sibley chart, given the fact that the aforementioned stellium in Pisces lands in the Sibley’s third house and the Moon in its 9th. In fact, this gives me the feeling that some international communications could prove to be favourable, despite some initial set-backs.

Just in case you are interested in seeing a chart of this Full Moon for yourselves, from the perspectives of both the UK and Eastern USA, I have included one of each at the bottom of this page for your reference.

Blessings to every one of you and I hope this week to be a positive experience for all. 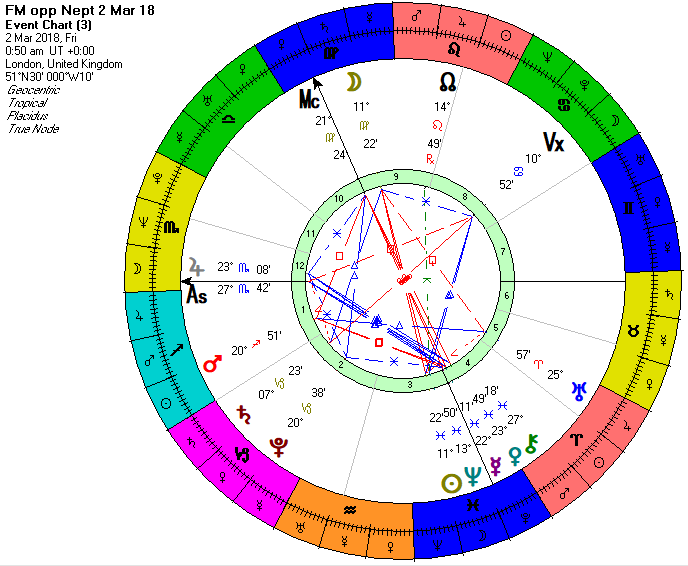 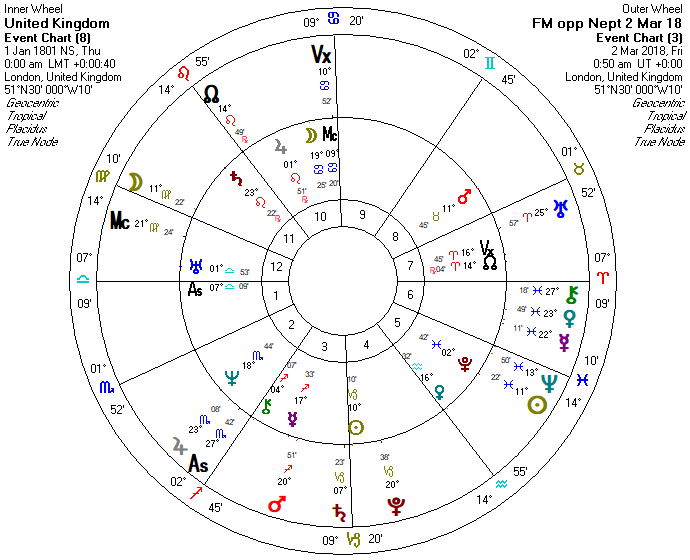 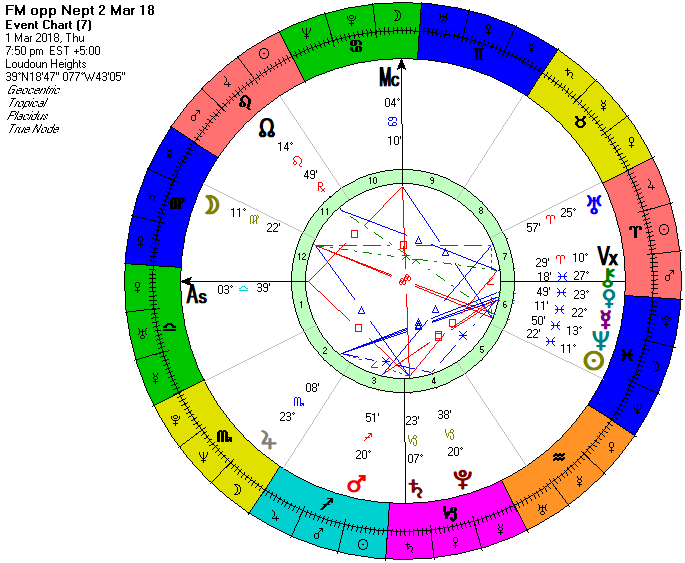 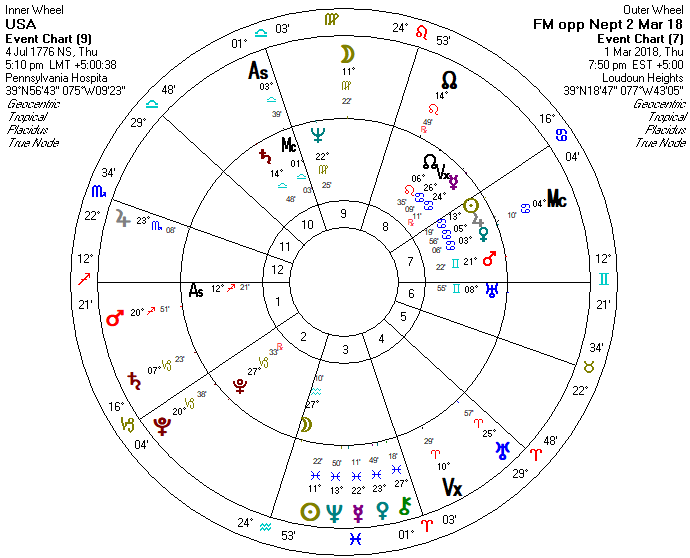