Forecast for this Super Blue Blood Moon Total Lunar Eclipse period and the fortnight ahead.

Most of you are probably already aware of the extra special event that is taking place in the skies this Wednesday, the Total Lunar Eclipse that will also be a Blue Moon and a Blood Moon.
First of all, I’d like to explain what each of these lunar expressions mean, as I know how inquisitive we all are by our nature and it’s good to be in the know! Most of us know that a Full Moon happens when the Earth is in-between the Moon and the Sun and the Moon and Sun are technically opposite one-another from our perspective on Earth. This usually happens once a month, sometimes twice. Although the three are snugly aligned by way of celestial longitude during a Full Moon, they are not always necessarily snugly aligned by way of celestial latitude. When they are snugly aligned by both coordinates (within a certain number of degrees), is when an Eclipse takes place. Just how snugly aligned they are by celestial latitude as well as longitude, will generally determine what type of an eclipse it is; a penumbral, a partial or a total Eclipse, a Total Eclipse being in near-perfect alignment both ways, hence the Moon being able to pass straight through the Earth’s umbra.

The Total Eclipse on Wednesday will be a Blue Moon, so-called because it is the second Full Moon within the same Month. This has historically been considered a rare occurrence, which gave rise to the common saying, ‘Once in a Blue Moon’, but these days, approximately every 2.5 years is generally not considered as rare as it used to be. It will also be a Supermoon, which means that the lunation is occurring whilst the Moon is at Perigee, that is, travelling through the point of its orbit that is the closest to Earth.

The term ‘Blood Moon’ can be used for different reasons, one of those being in reference to the biblical ‘Blood Moon Prophecy’ by Christians, which state that a tetrad of Eclipses coinciding on Jewish holidays will mark the beginning of an apocalypse. Another is in reference to October’s ‘Hunter’s Moon’ or ‘Sanguine Moon’, as another name aside from these for the first Full Moon following the annual ‘Harvest Moon’, in Native American cultures. However, most often scientifically and by NASA themselves, a Blood Moon simply describes when a Full Moon ‘will take on a reddish tint’, which is what many Total Eclipses tend to do, especially those that are Supermoons and are visible from the area you live in.

Astrologically, the effective strength of this rare and special Eclipse on Wednesday is very significant, not because it is a ‘Blue Moon’ or a ‘Blood Moon’, but mainly because it is a Super Moon Total Lunar Eclipse. The Moon is currently at one of the closest places to Earth she becomes within her cycle, which strengthens her magnetic pull on the ocean’s tides and she is at near perfect alignment with the Sun and Earth, both in celestial longitude and latitude, which, I imagine, would focus all of their energies between them together in a much more streamlined manner.

Eclipses usually shake things up for us in our lives or bring something to our attention that we need to be aware of. They may urge us to make decisions that we don’t really want to make by bringing things in our lives into prominence that were previously obscured from view. Acknowledging and dealing with things as they arrive and are presented to us during the time of an eclipse really is the best way to handle them, as this way, what is meant to happen afterwards can unfold accordingly and this may actually turn out to be something that is good for us. If we avoid situations as they are presented, we may only make matters worse, as energies that are not dealt with are more likely to accumulate and re-present themselves to us at a later date, in a more urgent manner.

Still, Eclipses do act like regular Full Moons, it’s just that they are so much stronger in nature. Great things can happen to us at the time of an eclipse, perhaps things we have been working towards for quite some time, especially if we have been sacrificing ourselves for something and working really hard, as Eclipses can also mark a time for the rewards of our efforts. Whatever happens, they are more likely to bring change in our lives than anything else. Eclipses are not a time when the world is asleep, but a time for things to happen that have been meaning to happen and they are a time to sit up, take notice and take action.

Take a look at which section (or house) of your chart the Super Blood Blue Moon Lunar Eclipse falls into to get an idea of which part of your life will likely be touched upon the most over this coming week, by calculating your chart with this Free Birth Chart. This Eclipse is in Leo, at 11°, so it may be a dramatic, passionate and fiery eclipse. It also conjoins the North Node in Leo and opposes Venus in Aquarius, also bringing Uranus in Aries into play by way of disposition. This means there could be romance, idealism and/ or money involved during this Eclipse and there may also be elements of surprises or changes that appear to be either jolting, sudden or exciting!
If your sign is around the middle of a fixed sign, Leo, Aquarius, Taurus or Scorpio, you may experience the energies of this eclipse quite strongly, especially if it is between 9° and 14° of one of these signs. You may also feel the Eclipse quite strongly being in a region where the Eclipse is most visible. These are North East Europe, Asia, Australia, North East Africa, North America, North West South America, Pacific, Atlantic, Indian Ocean, Arctic and Antarctica.

Below is a copy of the Eclipse chart for you to feast your eyes upon, for all you lovers of interpretation. Enjoy the week ahead! 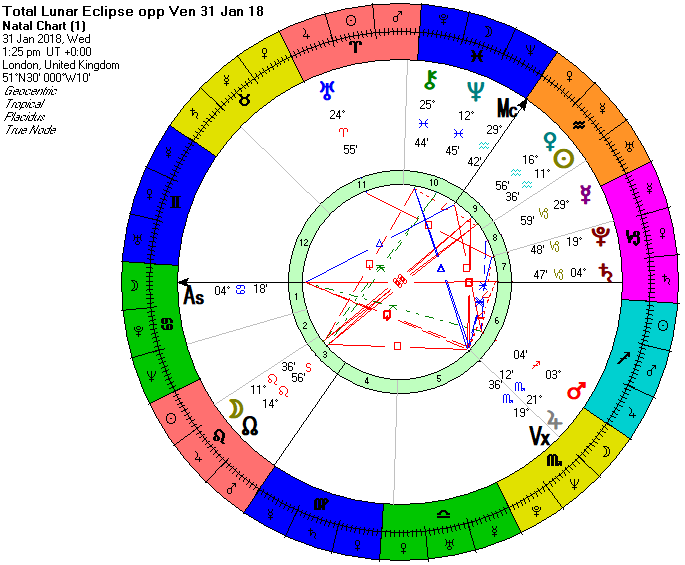