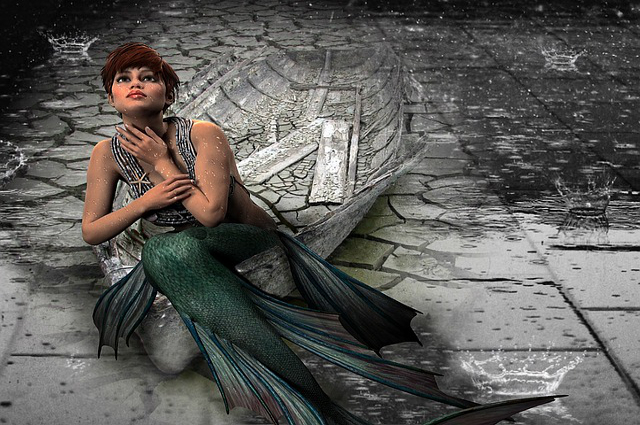 Mars isn’t in domicile, exaltation, detriment or fall in the sign of Pisces, but is disposed to Neptune in this sign. The bold, direct energy of Mars and the ethereal, dreamy energy of Pisces are so very contradictory to one-another, that when Mars is travelling through this sign, he really seems to have no other choice but to slow down to try to gather his bearings. Mars is so used to darting here and there, knowing exactly where he is going, yet he’s now wading through the deepest of waters all of a sudden. Perhaps the latter is similar to the way Mars in Pisces natives often feel.

As Pisces is ruled by Neptune, the giant planet who represents the ocean and is known to dissolve all she comes into contact with, it makes sense that some of the energies of Mars in these natives will generally be very much mellowed, giving that those with Mars in Pisces are probably much less likely to tend towards Mars’ blatantly aggressive or sexual nature than most, if not all of the other Mars signs.

Pisces is a Mutable Water sign, so these natives are likely to be adaptive yet receptive, in an exceptionally compassionate and empathetic manner, often finding more meaning in the depths of the hearts of others rather than anybody’s material worth and they may also feel the pains of others (both humans and animals) quite readily, whilst displaying tendencies to stick up for ‘the underdog’ or to bring those who are less fortunate under their secure wing by helping them out unconditionally.

They often carry a gentle, quiet persona and are generally kind and thoughtful towards those around them.

Pisces is a musing sign, so those with Mars in Pisces are often remarkably imaginative, having the ability to concoct intricate creations in their mind that are often extraordinary and multi-faceted, with great clarity and ease and this, along with their emotional empathy, no doubt allows them great strengths when placing themselves behind the eyes of others.

Also lovers of escapism, it is likely that they can often escape into their wonderful minds where they can allow themselves to be as blissfully creative as they please, often by delving into fantasy fiction or by finding ways to express their oceanic depths artistically, whether by painting, playing music, dancing or through other creative arts and literature.

Mars in Pisces natives are usually able to embrace the magical realm of art and expression as if they were born into it. They can be very sensitive to their surroundings, often showing psychic abilities, simply because of all the undercurrents they may sense in the atmosphere around them. They may also, at times, appear to be detached or elusive.

With their imaginations and their emotional connections with sensuality, it is understandable why folk born with Mars in Pisces might be extremely romantic and will seek an intense, spiritual bond with someone that is able to move them at a soul level.

Mars in Pisces’ boundless emotional wells may sometimes be difficult for them to control and when this happens after something has got them down, it might be that finding motivation to go about daily life becomes quite difficult. Other people in the life of the native may find this passivity somewhat difficult to understand, but those with Mars in Pisces need to have time to heal when they are overwhelmed, as they soak up the vibes of others so readily.

Mars in Pisces natives just need some time to recuperate while they work out their situations in their own mind so that they can move forward. These natives can be so receptive that they likely have a lot of thoughts and emotions to sort through. Have faith in them, as they will usually re-appear even wiser than the last time you saw them.

Mars in Pisces mantra quote: ‘Boundaries are the distance at which I can love you and me simultaneously’, Unknown