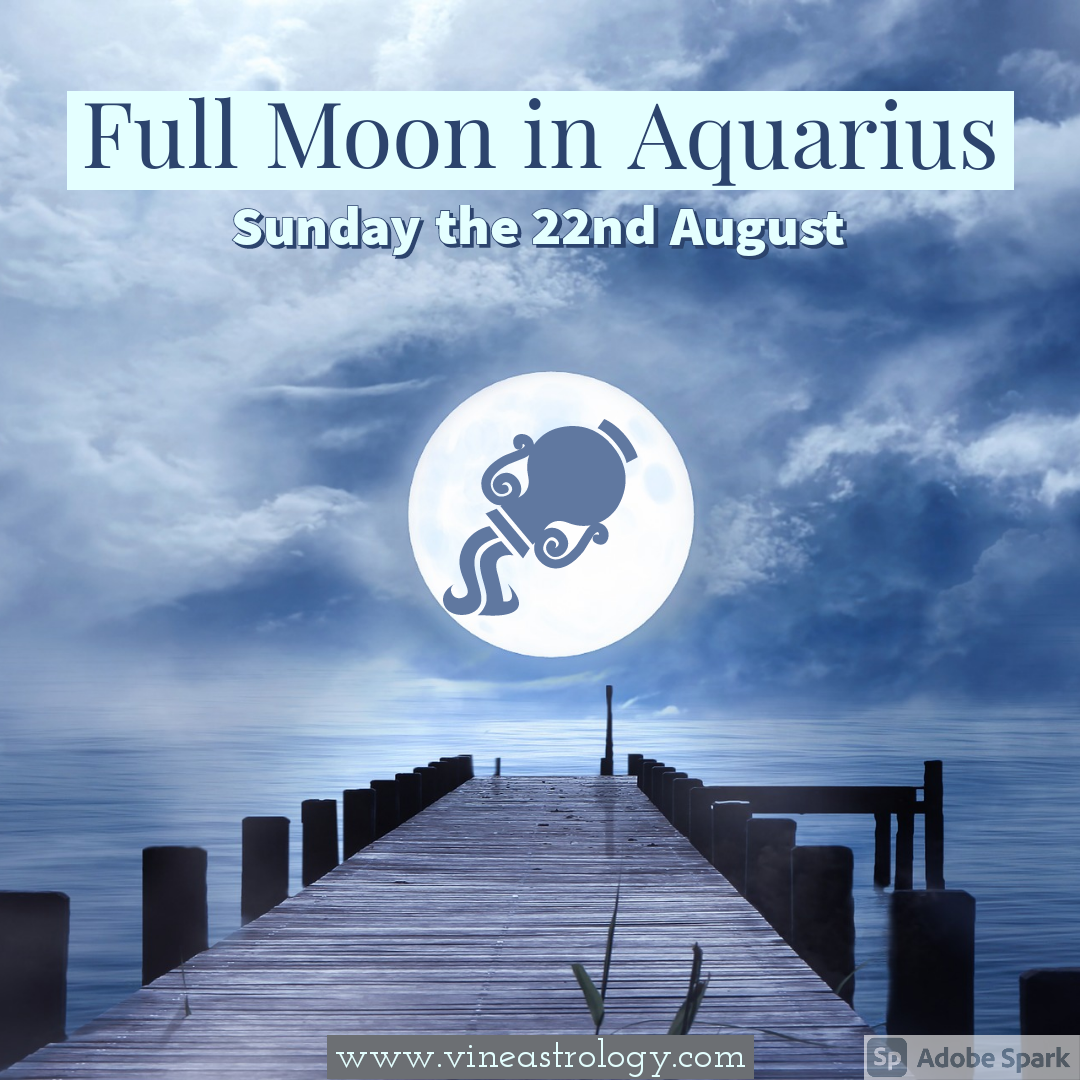 This will be the second Full Moon in Aquarius in a row, landing at 29°37’ of this fixed air sign and with the Sun in domicile in Leo.

This Full Moon is along the Aquarius/ Leo axis, so our collective values are again highlighted as are our social lives and our greater society.

Jupiter and the Moon

Jupiter will conjoin the Moon on Sunday in a separating aspect with an orb of just 2°43’. Right after the New Moon in Leo earlier this month, the Moon opposed Jupiter and I wrote about how this meant excess emotions with strong urges to run away from them and our responsibilities. The relationship between Jupiter and the Moon during the Full Moon this Sunday now carries on with the story of this month’s lunar cycle. Heightened emotions are still a theme as is a desire to break free from life’s constraints and obligations, but this time the Full Moon’s light will conversely administer a release valve for these tensions within us. This isn’t only because it will be the conjunction rather than the opposition but also because the Full Moon is usually for releasing and delivering and of course bringing in all that’s been sown since the time of the New Moon.

Venus in It’s a Kite-Sailing Lunation

There will be a lovely kite pattern too on Sunday, made up of the Moon’s North Node at 7° Gemini, Venus at 7° Libra, Saturn at 8° Aquarius and the Moon’s South Node at 7° Sagittarius. The apex of the kite will be the South Node in Sagittarius which is ruled by Jupiter, further bringing Jupiter’s part into play this month. The South Node often brings to mind our past and some of the struggles we’ve overcome, therefore, with the South Node as the apex of this kite during Sunday’s Full Moon, we’re gifted with new or returning opportunities to assimilate lessons from our past that we have previously missed.

The kite pattern’s signatures include Saturn, Venus and the North Node, so we’ll be assessing our responsibilities and how our values and beliefs play a part in our relationships with others. Whether the love, compassion and empathy we have are enough to propel us collectively forwards towards our goals may also become something to think about. Being along the Aquarius/ Leo axis again, this Full Moon’s focus can very much surround collective values, society and our social characters.

While the Moon will be disposed to Uranus along with Jupiter, Uranus will trine Mercury in Virgo. This means that relating to ourselves at a deeper level in practical ways is fundamental to our continuing journeys. Then, Uranus’ almost exact trine to Mars will support our momentum towards our objectives. Which changes can we make to honour our freedoms and the freedoms of others? Which responsibilities will help both ourselves grow and the people around us?

You can subscribe to my Full Moon article via email every month if you like, just in time for the Full Moon here.

I also offer Natal Astrology consultations, which include a forecast reading and a Zoom consultation where we can talk all about your natal chart and any transits you have coming up.