An Astrological forecast for this Full Moon period and the fortnight ahead.

Yes, as you’ve probably heard, there’s another Blood Moon tomorrow, which will make it the second one this year! This time the Moon will become Full during a Mercury retrograde in Aries, but, even though we may have all had our own usual Mercury Retrograde flavoured hiccups this past week, we may actually find some solace this weekend in the shape of loving, peaceful Venus as she is in her position of domicile during the Full Moon. The Full Moon will be in Libra at 10°44′ on Saturday and, as Libra is known to be the diplomatic and peace-making one of the zodiac, it is no surprise that Venus, the Roman goddess of love rules this balanced air sign. Another sign Venus rules is Taurus, which is the sign she will be neatly positioned in at nowhere other than 0°23′. This is not only a special position for her due to her positioning in a sign that she rules, but also because 0° of any sign is known amongst Astrologers as a ‘critical degree’ or as the planet ‘ingresses’ into that sign. When any planet or point is positioned at 0° of any sign, it has only just left behind all the complexities the previous sign, which in this case is Aries and is beginning the very start its new journey through the next. All of this means that Venus and everything she stands for; not least love, art, culture, sensuality, money, beauty and charm will be quite potent during the time of this Full Moon and, if the rest of the planets happen to be otherwise manifesting for us in a way that is any more unfavourable, Venus’ critical position and rulership over the Moon is bound to take the edge off this somewhat, if only for a short while.

Not only will Venus’ significance and position mean she is a very potent planet during this Full Moon, but the position of Mars, while still exhalted in Capricorn and snuggling close to Saturn (the planetary ruler of Capricorn himself) is also very strong, yet he could be experiencing some tensions. Mars and Saturn may be potent themselves in such a position, but their wider positioning at the apex of a Cardinal T-Square means that this Saturn/ Mars conjunction is, as I pointed out, under a lot of strain. This means that wherever this Mars-Saturn conjunction resides in your birth chart is the place in your life you could potentially sense some of the burden of these two large and compelling entities this weekend, especially if you have any planets of your own conjoining the Saturn/ Mars conjunction (that is, touching them or right next to them, within say, 8°). Depending upon who you are and what your birth chart says about you, you could experience this kind of aspect quite differently to the next person who might also experience such a conjunction. If both Saturn and Mars are strong and well positioned in your chart, for example, you may find you experience some stress relating to these planets, yet you may deal with the experience well. If, on the other hand, your own Saturn and Mars are afflicted and otherwise weakly positioned, you may find you have some difficulties during this Full Moon period, for example in responsibilities or disputes that are wearing thin on you or with controlling or bossy people who are quite frankly getting you down.

The T-Square occurring this weekend is composed of the aforementioned Saturn/ Mars conjunction in Capricorn, the Moon in Libra and the Sun in Aries, which makes this a cardinal T-Square and cardinal configurations amongst the planets are all about action, movement and leadership. People stepping forward and taking the initiative is the theme this weekend, with the Sun strong in pioneering Aries conjoining Mercury and Mars with Capricorn in Saturn depicting control (and self control) and building new structures and bridges (be it metaphorically or not). Then we have the Moon in Libra signifying diplomacy, nurturing and team players. We may see more people walking the walk without as much need to talk about the walk, if you see what I mean.

Now, about the tension that’s created by this T-Square. There does happen to be many people out there who will be able to find a positive outlet within themselves for this tense and potentially difficult configuration and these generally tend to be those people who have personal or outer planets placed at certain positions in the zodiac relative to the Saturn/ Mars Apex. If you only know your Sun position (your star sign), that’s fine because the Sun alone works amazingly well for an outlet too. These positions are between 5° and 13° Cancer (or for the Sun, those born in the last days of June or the first few days of July), between 5° and 13° Taurus or Virgo (or those born in the last days of April or August and the first few days of May or September, respectively) and to a slightly lesser extent, 5° and 13° Scorpio or Pisces (or those born in the last days of October or February and the first few days of November or March, respectively).

Example interpretation.
Mike Tyson is a Cancerian, with his Sun at 8°24′ Cancer and his Jupiter positioned really close by at 11°58′ Cancer. With his Sun and Jupiter positioned directly opposite transiting Saturn and Mars this weekend, he may be able to find such a creative and positive outlet for his energies through them, which could very well balance out or even negate the possible tensions that could have been otherwise experienced for him in the shape of the Saturn/ Mars conjunction (as the Apex of the T-Square). Not only this, but a bi-wheel of his chart with this transiting Full Moon will create for him a further configuration, known as a cardinal Grand Cross, which is only one position (his Jupiter/ Sun conjunction) away from the T-Square itself. Just to let you know, the cardinal Grand Cross is often much more balanced and fortunate than any T-Square to have present, especially with the Sun and Jupiter involved. The cardinal Grand Cross tends to act like a wheel of energy that just keeps on moving, releasing tensions and creating a sense of freedom and growth through initiation and resourcefulness.

If you would like your own personal interpretation of what the next 6 months holds for you (that is of course much more in-depth), please feel free to contact me here or on my Facebook page to book an appointment.

Blessings to all and I hope you enjoy the weekend. 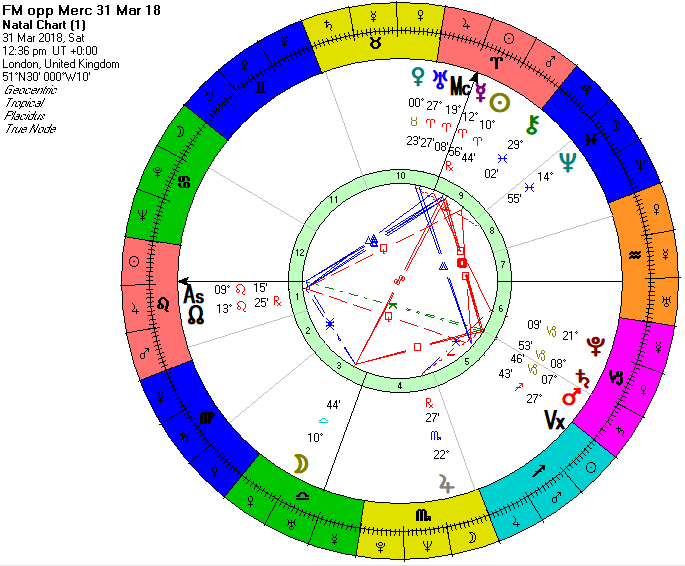 Chiron in the Houses of the Natal Chart, Thursday 8th April at 7:30 pm 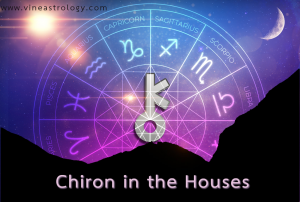